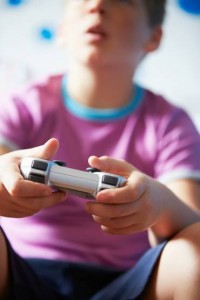 Research has shown that video games can have positive effects on behavioural and cognitive skills. But one must also accept that detrimental effects can potentially arise in children being over-exposed to video games

Indeed, just like some games can help harness perceptual and cognitive skills, video games can also lead one to develop maladapted behaviours. It has been shown that play­ing pro-social games led to more ‘helping’ behaviour, but also that playing a violent game led to more ‘harming’ behaviour. In fact, in lon­gitudinal study lead by Dr. Gentile, a leading researcher on the effects of video games on cognition, results show that that children who played more pro-social games early in a school year demonstrated increased helpful behaviours later in the school year. The opposite is true in that children who played more violent games did not necessarily exhibit “violent” behaviour, but tended to exhibit less helpful behaviour.

Other than a habituation to violence and “less-helpful” behaviours that violent video games can confer, some studies are also showing that children able to sustain their attention on fast-moving and ever-stimulating games have a harder time doing so during slower-paced activities. When a person is used to being stimulated at a high rate of presentation for extended periods of time, it becomes harder for him to sustain his attention on a slower-paced and much less stimulating activity. Other difficulties also arise through prolonged periods of gaming or when “addiction” creeps in; indeed, excessive internet use or gameplay can lead to adverse consequences on behaviour such as social withdrawal, loneliness, depression, or even heightened irritation and trouble focusing on less stimulating work or within less rewarding social environments. Some people who are too immersed in their games can also develop weaker thresholds for frustration: externalized aggressive behaviour such as screaming or physical action can arise in people who are confronted to repeated failures and to obstacles they have a hard time overcoming, or in people who are interrupted and pressured into suddenly halting their current activity.

Furthermore, time spent playing also means less time invested in studying or in sports: while it is not rare to see some children or even college students spend less time and effort working on projects or studying for exams (therefore compromising success), others will be more prone to health problems like neck pain, diminished cardiovascular skills or weight gain.

The advent of violent gaming can also desensitize people and draw them away from empathic behaviour and closer to cold, factual action: being exposed to violence can lead some to become indifferent or less reactive when actually faced with such events. These are some of the reasons for which the military is increasingly employing such games to draw in new candidates (the others being that video games can be considered as training regimens for specific skills, like flight simulators for flying drones for instance). Desensitization does nonetheless have its place within given contexts, scenarios or professions: take for instance, surgery procedures where doctors need to train NOT to react or feel anything while completing a procedure.

Dr Gentile resumes this beautifully: “Whatever we practice repeatedly affects the brain, and if we practice aggressive ways of thinking, feeling and reacting, then we will get better at those. This is not to say that violent games necessarily cause violent behaviours, because human aggression is complex and multi-causal. But it does suggest that when we practice being vigilant for enemies and then reacting quickly to potentially aggressive threats, we are rehearsing this script.” This also goes to say that when we practice 1) constantly being stimulated by sounds-images-noises or being tense and alert; when we practice 2) being silent and alone for long stretches of time; or when we practice 3) inactivity, we end up “forgetting” 1) how to remain patient, concentrated and relaxed; how to 2) interact socially and initiate or maintain conversations; and how to 3) practice, integrate, uphold and apply healthy habits of living.

While there are definitely positives applications to video games, it might be important to remember than over-exposure can also lead to detrimental behaviour. Moderation is key, and a child who is able to control himself and properly manage his time and balance responsibility & necessity with leisure, will learn to uphold the necessary etiquette for living a balanced life.