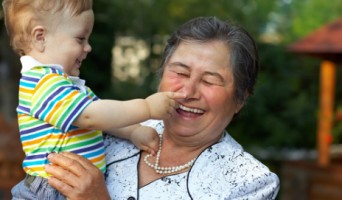 Babysitting Can Help Grandmothers Protect their Brain and Cognition

A research published in October 2014, in the Menopause journal, has shown positive benefits to grandparents babysitting their grandchildren. The longitudinal study investigated the effect that spending time with grandchildren had on menopausal women. A few measures were used (a processing speed, an executive functioning and a memory/working memory test) to verify whether or not babysitting had any effect on the 186 participating grandmothers.

Results did show that spending 1 day per week with the little children did bring about positive change in cognition, whereas spending too much time (5 days per week) predicted poorer working memory and processing speed skills.

They hypothesize that helping out for at least one day per week allows for optimal brain activity to be maintained. In fact social skills are utilized, physical activity is called upon, planning and organization become necessary, emotional ties are enriched and creativity is engaged, which could indeed help grandmothers keep their brain active. On the other hand, overexertion and helping out too many days a week with babysitting brought along fatigue as well as strained relationships between grandmother and parent, which impacted negatively on said measures.

Do be careful however, many articles are twisting some of these babysitting facts around. 1) while the study clearly states that grandmothers were involved, blogs and articles are « transfering » these benefits to grandfathers too; it makes sense, but that’s not what the study tried to prove as it centered around post-menopausal women. 2) From cognitive benefits, sites are twisting information into saying that grandparenting in general helps prevent Alzheimer’s disease, which again is not what was talked about.

Nonetheless, there seems to be positive gains for grandmothers (hypothetically grandfathers too) to be  babysitting on occasion, so why not get involved? Do take the time to rest however, you deserve it and you’ve paid more than your dues. After all, it’s up to your sons and daughters to raise their own!